Brighton architecture is both diverse and impressive. Famous for our regency squares and the dramatic Royal Pavilion, the city is also graced with many more lesser known architectural treasures. In fact, there are over 1200 listed structures with ‘special architectural or historical interest,’ in the city.

Having been a firm of solicitors in Brighton for over one hundred years, Burt Brill & Cardens have witnessed a significant amount of architectural change from our offices on the Old Steine. We have created this guide to help you better understand and explore Brighton’s architecture.

Regency – 1811 – 1830
In the late Georgian period, under the reign of the Prince Regent (later George IV) the Regency style emerged. Although it retained some neoclassical elements, it was more decadent and exotic taking on Asian influences and featuring stucco plaster ornamentation. Brighton was regularly visited by the Prince Regent and became a hotbed for experimental architecture, as architects responded to his fashionable and flamboyant tastes.

Where: Centre of Brighton, just off the Old Steine
Who: John Nash
When: 1815 and 1822. Opened in 1823.
What: Built for the Prince Regent by John Nash, the Royal Pavilion Brighton is a fine example of Regency Architecture. Incorporating Indian and Moorish styles with its numerous parapets as well as Chinese-influenced interiors, it is an exotic and outlandish palace that still delivers a wow factor. For more on the Royal Pavilion read this blog.

Where: Church Street, Centre of Brighton
Who: William Porden
When: 1803 – 1808
What: These Grade 1 listed buildings were commissioned by Prince Regent as a stable and riding house in 1803 at the extremely high cost of £54,783. The influence of Indian architecture is clear, in particular on the Dome that was inspired by the Friday Mosque in Delhi. The domed roof was one of the largest of its kind in the world at the time. Today, the Corn Exchange is used as an exhibition hall and the Dome as a concert venue.

Where: Hove
Who: Charles Busby
When: Built from 1825
What: The Brunswick Estate is one of the finest examples of Regency architecture in the country. It was built as a housing scheme for families and began with the grand Brunswick Terrace and Brunswick Square before being expanded further.

Victorian 1837 – 1901 & Edwardian (1901 – 1914)
The accession of Queen Victoria in 1837 saw a gradual move away from the Regency style with architects embracing mass-production, manufacture decorative details and new building techniques. Victorian architecture encompassed a range of styles including Gothic Revival, Neoclassicism, and Queen Anne with architects often picking and choosing elements for a client. An obsession with height and a fondness for combining red brick with stone characterised the period. The period resulted in a number of impressive churches in Brighton and most famously the city’s piers. The late Victorian and Edwardian period was a period of change as design moved away from ornamentation towards simplicity.

Where: Seafront
Who: Eugenius Birch
When: 1863 – 1866
What: Designed to cope with the impact of the waves, the West Pier featured an impressive network of cast iron columns and girders to support the promenade. A number of editions soon transformed the pier into an Asian-influenced architectural triumph, reaching a glamorous heyday in the 1920s. The Pier tragically burnt down in 2003. The fantastic West Pier website has more information.

Where: Hove
Who: Unknown
When: 1866
What: The British Engineerium is a good example of High Victorian Gothic with Victorian industrial engineering and embellishment combining with impressive results. The polychrome brickwork is a distinctive feature along with decorative gables and a 29-metre chimney. The buildings have been restored and now house a working Victorian pumping station and museum of mechanical antiquities.

Where: Kings Road, Brighton Seafront
Who: Alfred Waterhouse
When: 1890
What: The Metropole is an imposing redbrick and terracotta seafront hotel that stood in marked contrast to the adjacent white stuccoed Regency buildings along the seafront. The hotel was designed by Alfred Waterhouse who was the architect behind University College London and the Natural History Museum in South Kensington. The Hotel cost £57,000 and contained 340 bedrooms and three dining-rooms with vaulted ceilings. Remarkably, the hotel had its own printing room that produced all of the the stationery and menu cards up until 1982.

Where: Seafront
Who: R. St. George Moore
When: 1891 – 1899
What: The world famous Brighton Palace Pier opened in 1899 at an impressive 524 metres long. It featured ornamental arches to accommodate illuminations and a theatre (added in 1901). The theatre has now been removed and replaced with large thrill rides. Palace Pier is now among the Top 10 visitor attractions in the country.

Art-Deco – 1925 – 1937/40
The Art Deco style was characterised by geometric shapes, often in symmetrical arrangements, with sharply defined outlines, smooth sweeping curves and exterior decoration. Art Deco buildings were dramatic and stylized, influenced by the silver screen and the jazz-age, although many art deco motifs were actually inspired by the architecture of ancient Egypt. It was both elegant and accessible, being functional as well as dramatic.

Where: Corner of Dyke and Western Road
Who: Garrett & Son
When: The Imperial Arcade was originally built in 1923 on the site of the North Street Brewery, but was rebuilt in 1934 in an Art Deco-style combining strong symmetrical lines and smooth curves.

Where: Saltdean
Who: RWH Jones
When: 1938
What: The Saltdean Lido is a fantastic example of Art Deco with its streamlined appearance taking influence from the aerodynamic lines of an aeroplane.

Where: Hove
Who: Murrell & Piggott
When: 1938
What: A large apartment block with exposed brickwork, curved balconies, and a strong sense of symmetry providing many of the traits of the Art Deco movement.

Where: Gloucester Place, Brighton
Who: Edward A. Stone
When: Completed in 1933
What: Opened in December 1933, the Astoria Cinema was a bold Art Deco building that seated over 1800 people. It featured an impressive Art Deco auditorium decorated by Henri and Laverdet. It closed in 1977 and is now in a state of disrepair. There is an excellent article on it here.

Modernism – 1920 – 1985
Modernism was characterised by an absence of ornamentation and a focus on the function of the building as well as its materials which included pre-fabricated elements such as metal frames and reinforced concrete. After the Second World War, the Modern Movement was heavily involved in the reconstruction of post-war Britain, creating buildings with rectangular or cubist forms, and strong horizontal on vertical lines.

Where: Brighton seafront on the corner of Western Street and the Kings Road
Who: Wells Coates
When: Completed in 1935
What: An impressive example of pre-war early Modernism, this 11-storey apartment block has all the features associated with the Modern Movement including concrete framing.

Where: University of Sussex
Who: Sir Basil Spence
When: 1959 – 1962
What: Basil Spence and Partners were commissioned to build Falmer House in 1959. The completed building featured concrete vaults and arches that contrasted dramatically with the red brick faces. Serving as the main campus building, it marked the beginning of the first phase of Spence’s masterplan for the university. He said of the project: “I feel that one of the most important things is that a university should give the student a feeling of confidence.”

Where: 137 Kings Road
Who: R. Seifert and Partners
When: Opened in 1967
What: Replacing an existing hotel that was destroyed by fire in 1964, the Holiday Inn is a 17-storey Modernist block designed by Swiss-British architect, R. Seifert who was best known for designing the Centrepoint tower.

Where: Kings Road, Brighton Seafront
Who:  Russell Diplock
When: Opened in 1977
What: Commissioned by Brighton Council, the iconic Brighton Centre is an example of Brutalist architecture with its use of concrete and strong geometric shapes. As a venue it has held numerous party political conferences as well as Bob Marley, Bing Crosby and The Who who have all performed at the Brighton Centre.

Post Modernism 1986 –
Post Modern architecture is characterised by the playful borrowings of architectural elements from various movements from any period. These building re-invent historical details and classical motifs and apply them to modern structures. You can expect to see bright colours, a variety of shapes and materials, and structural variety.

Where: Marine Parade, Brighton seafront
Who: PRC Fewster
When: Completed in 2001
What: Completed in 2001, the Van Allen Building reflects the Art Deco-style of the 1930s with a curvilinear outline. The Marine Parade penthouse apartments not only reference Brighton’s Art Deco and Modernist buildings, but also provide a nautical reference with its use of porthole windows.

Where: Jubilee Square, Centre of Brighton
Who: Bennetts Associates and LCE Architects (Lomax Cassidy & Edwards)
When: 1999-2005
What:  Shortlisted for the Stirling Prize and awarded Prime Minister’s Public Building 2005, the Jubilee Library drew inspiration from its locality and the work of Frank Lloyd Wright. It uses mathematical tiles—an 18th-century design element used frequently in Brighton but rarely found elsewhere – as well as making use of natural light. The Jubilee Library is now one of the busiest libraries in the country.

Where: Above the buildings of the Royal Sussex County Hospital
Who: BDP
When: Opened in 2007.
What: The ‘Alex’ won the Prime Minister’s Better Public Building Award and incorporates nautical themes as well as a bright central atrium allowing daylight to enter the building. It is a dedicated paediatric hospital with 100 patient beds, but is designed to not feel like a hospital. 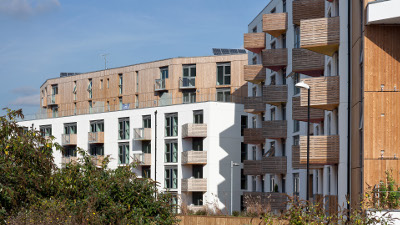 Where: Isetta Square, New England Quarter, just north of Brighton Railway Station
Who: BioRegional Quintain and Crest Nicholson (architects: Feilden Clegg Bradley)
When: Opened in 2009
What: One Brighton was hailed as the UK’s largest private car-free development and a model for sustainable living. Consisting of two residential blocks arranged around a public courtyard, the development is part of the New England Quarter and provides multi-use units including affordable housing. Receiving numerous building awards nominations, One Brighton won the 2009 RTPI Planning Award for Sustainable Communities, was shortlisted for the 2010 RIBA award and achieved a Commendation in the 2011 Civic Trust Awards. 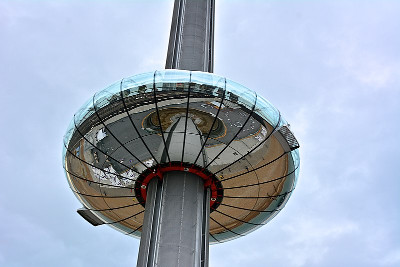 Where: Lower Kings Road, Brighton Seafront
Who: Marks Barfield and Jacobs Engineering
When: Opened 4 August 2016
What: The 162 m (531ft) seafront observation tower provides visitors with 360-degree views across Brighton, the South Downs and the English Channel from an enclosed viewing pod. The architects of the needle tower also designed the London Eye and the building’s conception came from the idea of creating a vertical pier. The structure stands at the land end site of the former West pier.

For many, buying a historic home in Brighton is a dream-come-true, but with great architecture comes great responsibility. Many of Brighton’s Regency homes are considered historically significant, especially the huge villas which are typical of the area and line the squares and seafront areas, and if you are buying a listed property, there are a number of things you will need to be mindful of.

If you are interested in buying a listed building in Brighton, it is essential that your residential conveyancing solicitor understands the area and the searches and processes needed to ensure any issues and difficulties are handled as smoothly as possible.

Resources and Further Reading on Architecture in Brighton